Karl Lagerfeld is considered a living legend, and pure genius in the fashion world. He designs,  he directs, he photographs, he is a creative mind the likes of which we may never see again in our lifetime. He’s like our generation’s much “chic-er” Andy Warhol, but his latest work for Dom Perignon is… well its a boob. Inspired by Claudia Schiffer its a boob and nipple, a “boob bowl” with 3 bottles of Dom.
I really don’t know what else to say. Have a mentioned its just a sculpture of a boob? just one too, might as well throw in another but I guess that would have been too weird. I used to think Dom Perignon could do no wrong, but when persuaded my Karl lagerfeld anything is possible.
The bottle is given as a free gift whenever a bottle of  1995 Dom Pérignon Oenothèque  is purchased for $3150.00 US. Now, lets not all go get one all at once. 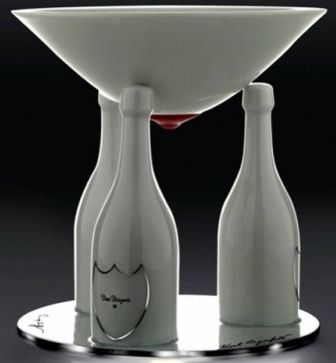